I found the study below, from the University of California Davis, both alarming and thought provoking. It reveals that 47 percent of the domestic dogs tested in Iraq had an active Bartonella infection. The infection rate is potentially much higher because the antibody testing they used has far more false negatives than testing with actual blood smears.

Are our troops getting exposed to more Bartonella in Iraq more than they would here in America?

The answer is, most likely, yes. Americans spend more money on their pets than Iraqi citizens. They treat their pets for fleas and they often pay their veterinarian to test their dogs and cats for Lyme disease and Bartonella. Fleas on cats were found years ago to spread Bartonella, thus the original name for Bartonellosis was “cat scratch fever.”

As the Medical Director of Sponaugle Wellness Institute, I have treated hundreds of patients with Bartonella. Most of these patients did not have cats. You don’t need a cat to get “cat scratch fever.” Ticks, mosquitos, and fleas have all been proven to harbor Bartonella and the Lyme spirochete. 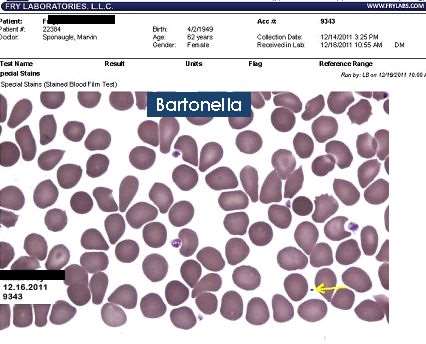 Are American troops infecting their wives and husbands with Bartonella when they return from Iraq?

Most likely they are. We know that the larger Lyme spirochete is passed from one spouse to another during sexual activity. We also know the Lyme spirochete can cross the placenta infecting an unborn baby. Why would we not believe that the much smaller Bartonella bacterium would readily pass through the placenta and infect sexual partners.

Soldiers returning from Iraq have experienced a much higher rate of psychological disorders than other war veterans including; depression, anxiety disorders, PTSD, Bipolar disorder, and addiction issues.

If indeed our troops are getting infected with Bartonella in Iraq, the answer is definitely yes. Bartonella is notorious for causing mental disorders, especially rage issues.

I have performed clinical research in hundreds of Lyme patients comparing their psychological symptoms to changes on their brain scans and their brain chemistry patterns. Those Lyme patients, who on blood smear testing, revealed a significant Bartonella infection, always experienced more severe psychological symptoms. This is with the Lyme biomarker CD 57 being relatively equal.

These Bartonella patients suffer from a phenomenon called excito-neurotoxicity, their brain is over-electrified. They often state their brain feels like it’s going to explode or it feels like it’s on fire. Symptomatically, they suffer with insomnia, anxiety disorders, panic disorder, rage issues and in the most severe cases, paranoia.

Perhaps too many veterans from the Iraq war are being misdiagnosed as having PTSD, when in fact they are suffering from brain infections with Bartonella. We could argue that these soldiers have experienced no more psychological trauma than veterans from previous wars.

Lyme literate doctors are fully aware that Lyme disease goes undiagnosed in millions of Americans. I have personally treated hundreds of patients who were infected with both Lyme and Bartonella and I am convinced that Bartonella is under diagnosed far more than Lyme disease!

At Sponaugle Wellness Institute, we diagnose Bartonellosis in 90 percent of our chronic Lyme patients. Many of these Lyme patients were previously informed by other Lyme physicians that they were not infected with Bartonella.

Problematic is that antibody and PCR testing for Bartonella will often produce false negatives when the Bartonella bacteria are sequestered in a “bio-film bubble” as seen below in my patient’s blood smear. 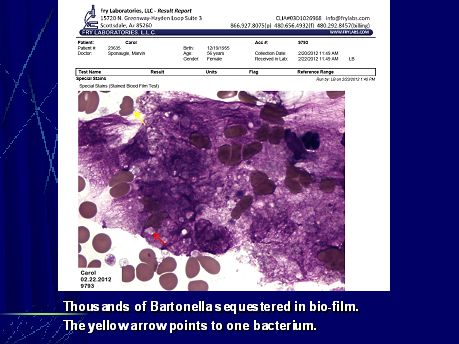 Perhaps the most compelling question is whether our military would find it more efficacious to routinely test Iraq war veterans for Bartonella than to label infected soldiers as mentally disturbed and treat them with psychiatric medicines.

As I finished this article on April 23, 2013, I picked up the St. Petersburg Tribune which I had not read for two weeks. Maybe it’s a God thing. I found the following Associated Press Article titled “Iraq Vet Pleads Guilty to Killing 5 At Clinic.”

The story explains that Army Sergeant John Russell went on a shooting spree at an Army mental health clinic in Bagdad. It was one of the worst instances of soldier-on-soldier violence in the Iraq war.

Russell was nearing the end of his third tour in Iraq when according to other soldiers in his unit he became distant and paranoid. He was referred to the Camp Liberty clinic where he received prescription medication which apparently made him suicidal, he later returned to the clinic and shot five soldiers.

I couldn’t have made up a better story to match the science I just explained in this article. I wrote a similar blog on Adam Lanza pleading for testing. Perhaps if enough of you Lyme – Bartonella literate people share this on your Lyme blogs, we can unite in an effort to mandate testing for soldiers like John Russell.