What Are "Forever Chemicals"?

PFAS (Per- and polyfluoroalkyl substances), commonly known as “forever chemicals,” are a family of chemicals that do not occur naturally in the environment.

PFOA (Perfluorooctanoic Acid) and PFOS (Perfluorooctanesulfonic acid) are the most common of the PFAS family, although both are being phased out due to their adverse health and environmental effects. They are being replaced with other PFAS compounds that share their potential to repel oil, grease, and water.

PFASs are often called "forever chemicals" as they do not break down in the environment and are found throughout the world, in humans and other animals, and our food supply. The most studied PFAS compounds in terms of environmental and health effects are PFOA and PFOS, followed by PFHxS and PFNA.

Perfluorooctanesulfonic Acid refers to a group of synthetic compounds containing thousands of chemicals formed from fluorinated PFOA and PFOS are fluorinated organic chemicals that are part of a larger group of chemicals referred to as perfluoroalkyl substances (PFASs).

PFOA and PFOS have been the most extensively produced and studied of these chemicals. They have been used to make carpets, clothing, fabrics for furniture, paper packaging for food, and other materials (e.g., cookware) resistant to water, grease, or stains. They are also used for firefighting at airfields and in several industrial processes. Scientists have found PFOA and PFOS in the blood of nearly all the people they tested.

Drinking water is a source in the small percentage of communities where these chemicals have contaminated water supplies close to airfields at which they were used for firefighting. 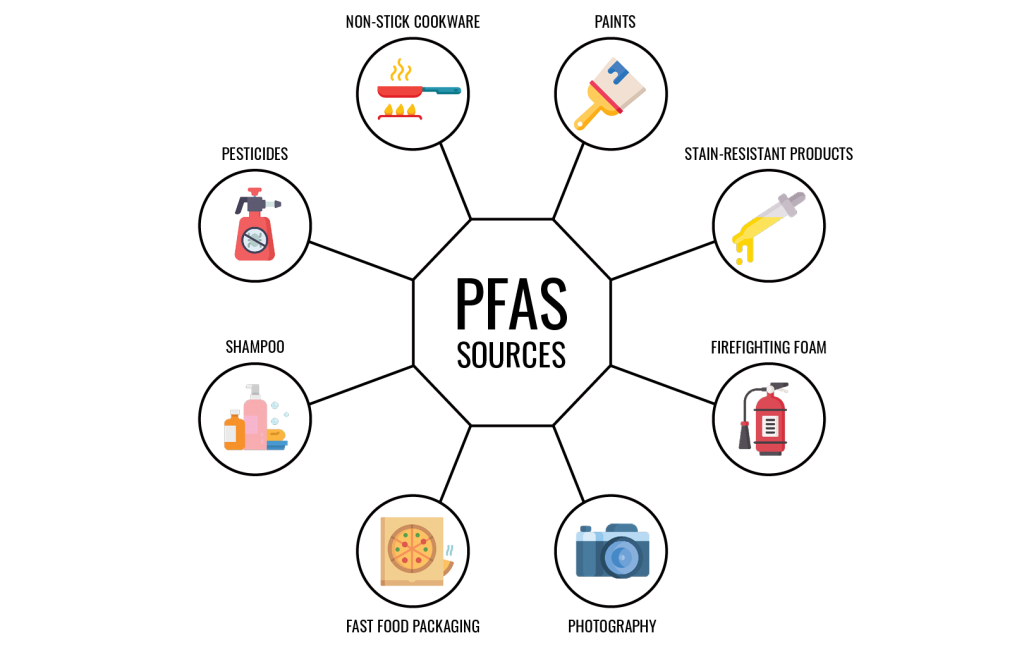 How Does PFAS Contamination Occur?

Most PFAS have been largely discontinued in manufacturing, but they persist in the environment, released into:

PFOA has been used to make PTFE (polytetrafluoroethylene) and can be found at contaminant levels in products containing PTFE, such as Gore-Tex®, Teflon®, and anti-aging cosmetics.

A 2019 study has also found PFOA in dental floss materials. Another found higher levels of PFOA, and other PFAS compounds, in blood samples after people ate at fast food restaurants, or consumed either pizza or microwave popcorn at home. Because PFOA is persistent in the environment (it does not break down), it is a common contaminant in drinking water.

PFOA is also found in indoor dust, especially in newly renovated buildings or homes with new upholstered furniture or carpeting.PFOA is very stable and bioaccumulates in the blood and tissues, such as the lungs and kidneys, in people and animals.

Increased intake of PFOA through breastfeeding decreased the diversity of infants’ gut microbiome, a factor associated with increased risk for developing breast cancer in adults. Higher exposure to PFOA in early childhood was associated with decreased Body Mass Index, HDL-cholesterol levels (thought of as “bad” cholesterol), and borderline insulin resistance in 6-8-year-old girls.

Both the International Agency for Research on Cancer (IARC) and the U.S. Environmental Protection Agency (EPA) have designated PFOA as a potential human carcinogen. In addition, there have been several findings that exposure to PFOA could be associated with endocrine (hormone) disruption and an increased risk of developing breast cancer.

PFOS (Perfluorooctanesulfonic acid) is closely related to PFOA and is also ubiquitous in the environment. Its main use has been as a stain repellant and fabric protector; it is the main ingredient in Scotchguard® and is also an ingredient in firefighting foam. PFOS levels in the US population have decreased over the past decade as the chemical has been phased out of use in the United States.

Still, PFOS is found ubiquitously in human samples and has been detected in amniotic fluid[26] and umbilical cord blood and is associated with lower weights at birth but higher weights at 20 months of age.

PFOSA (Perfluorooctane sulfonamide) is a PFAS compound that breaks down to PFOS in the environment. It has been found to damage the health of cells and their ability to process fats in salmon liver cells.

PFHxS (Perfluorohexane sulfonic acid) is also ubiquitous in the environment. One study detected PFHxS in nearly all people tested for PFASs.

An analysis of water and fish contaminated by an accidental release of firefighting foam in Canada found a small amount of PFHxS.A Swedish study detected high levels of several PFASs, including PFHxS, in firefighters compared to a control group and a 2020 study found that female San Francisco firefighters, as compared to office workers, had more than twice the levels of serum PFHxS (along with raised levels of PFUnDA and PFNA).

PFHxS has been found to alter development in rats, especially in the reproductive system. PFHxS and other PFASs have been detected in breast milk, and it was concluded that breastfeeding is a considerable source of exposure to perfluorinated chemicals for infants. Despite these findings, breastfeeding remains the best option for newborn and infant nutrition.

PFNA (Perfluorononanoic acid) and PFDoA (Perfluorododecanoic acid) are synthetic perfluorinated chemicals that have been found in humans and wildlife worldwide. PFNA may lead to developmental and reproductive toxicity in males.

Several epidemiological studies have found a link between PFOS, PFOA, and PFNA and reduced semen quality. PFDoA has been found to affect the reproductive function of male rats.

Perfluorohexanoic acid (PFHxA) and Perfluoroheptanoic acid (PFHpA) are shorter chain PFASs that have been detected in drinking water. Some researchers believe that the increasing content of short-chain PFASs in water reflects increased use of these PFASs as replacements for PFOS and PFOA-related substances.

Early research suggests that PFHxA and PFHpA may be developmental toxicants. PFHpA demonstrated more severe effects on liver and heart development than PFHxA.

Perfluorobutane sulfonic acid (PFBS) was developed in 2003 as a PFOS replacement. PFBS has been found in drinking water and samples of whole fish, including striped mullet, anchovies, young hake, and swordfish fillets.

Since 2003, it has also been marketed as a stain-resistant treatment for carpets. One study found PFBS in household cleaning products between 2007 and 2011. It has been suggested that PFBS could affect neuronal development and alter the hormonal system by allowing imbalances between androgens and estrogens.

Perfluorooctane sulfonamide (PFOSA) has been found to damage the health of cells and their ability to process fats in salmon liver cells. In people, higher PFOSA levels have been associated with changes in kidney function.

Perfluorobutyric acid (PFBA) is part of the perfluoroalkyl family, and low levels have been detected in drinking water. A 2014 study found high accumulation levels on lettuce and strawberries irrigated with reclaimed water.

PFBA has also been found in donor blood serum samples and samples from ski wax technicians exposed to high levels of PFASs. 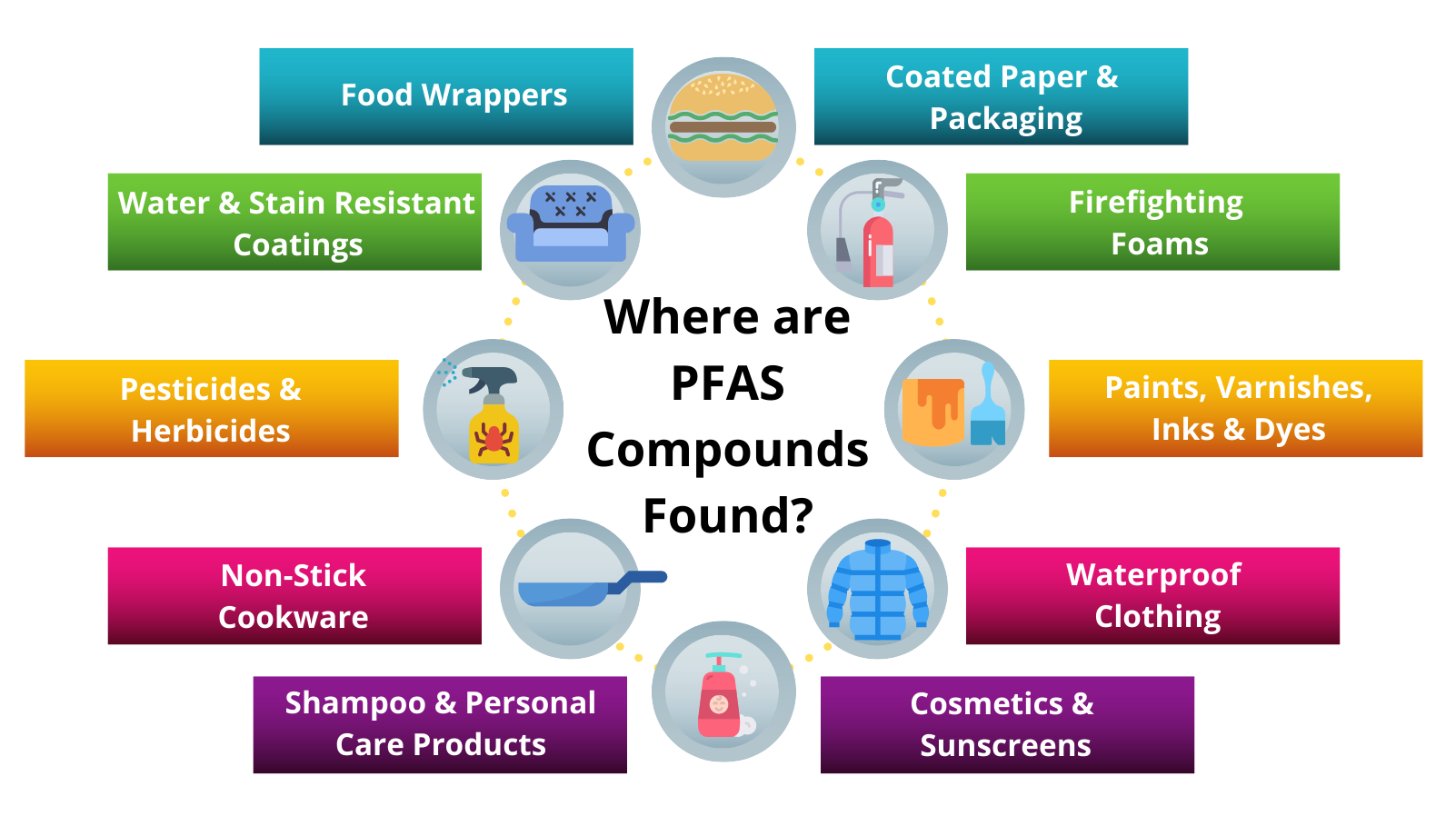 Where are Forever Chemicals found?

A study of Inuit women in Greenland showed that women with higher blood serum levels of PFOS, PFOA, and total PFAS have an increased risk of breast cancer.

In a more recent follow-up of this cohort, higher total serum PFASs and levels of PFOA, PFOS, and PFHxS were associated with an increased risk of developing breast cancer.

A 2017 Danish study has shown that women with variability in the structures of the genes involved in the synthesis and metabolism of estradiol may be more sensitive to the effects of PFOSA (a precursor of PFOS) on an increased risk for breast cancer.

Higher levels of PFOA and PFOS are associated with difficulty conceiving, longer delays in becoming pregnant, and early onset of menopause in women.

Studies in rodents have shown that exposure to PFOA can delay the development of mammary glands, reduce birthweight and cause neonatal death.

Who is most likely to be exposed to PFAS “Forever Chemicals”?

PFAS chemicals are ubiquitous, meaning that almost everyone will be exposed to at least small amounts. People living near PFOA manufacturing sites, contaminated military sites, and regions with PFOA-impacted drinking water may be at risk for higher levels of PFOA.

Firefighters, especially officers and those actively fighting fires (compared to drivers), are exposed to significant levels of PFAS.

Who is most vulnerable to the health effects of PFAS “Forever Chemicals”?

Women, particularly pregnant women and children, are most vulnerable to the potential health effects of PFAS chemical exposure.

What are the top tips to avoid exposure to PFAS “Forever Chemicals”?

Do not use non-stick cookware made from per and poly-fluorinated substances. Instead, use ceramic-coated non-stick or well-seasoned cast iron cookware.