The  Sponaugle Wellness Institute is a premier world-class medical facility located in Oldsmar, FL, providing advanced, research-based alternative and conventional medical treatments to patients needing to recover from the most complex cases of chronic illness worldwide.

When patients suffer from gluten sensitivity, they develop severe intestinal permeability or leaky gut syndrome. They constantly leak undigested proteins from their gut into their bloodstream. Some of these proteins resemble glutamic acid decarboxylase, the enzyme responsible for converting glutamate into GABA. Subsequently, they develop a deficiency of glutamic acid decarboxylase resulting in excessive levels of the stimulating brain chemical glutamate and a deficiency of relaxing brain chemical GABA. 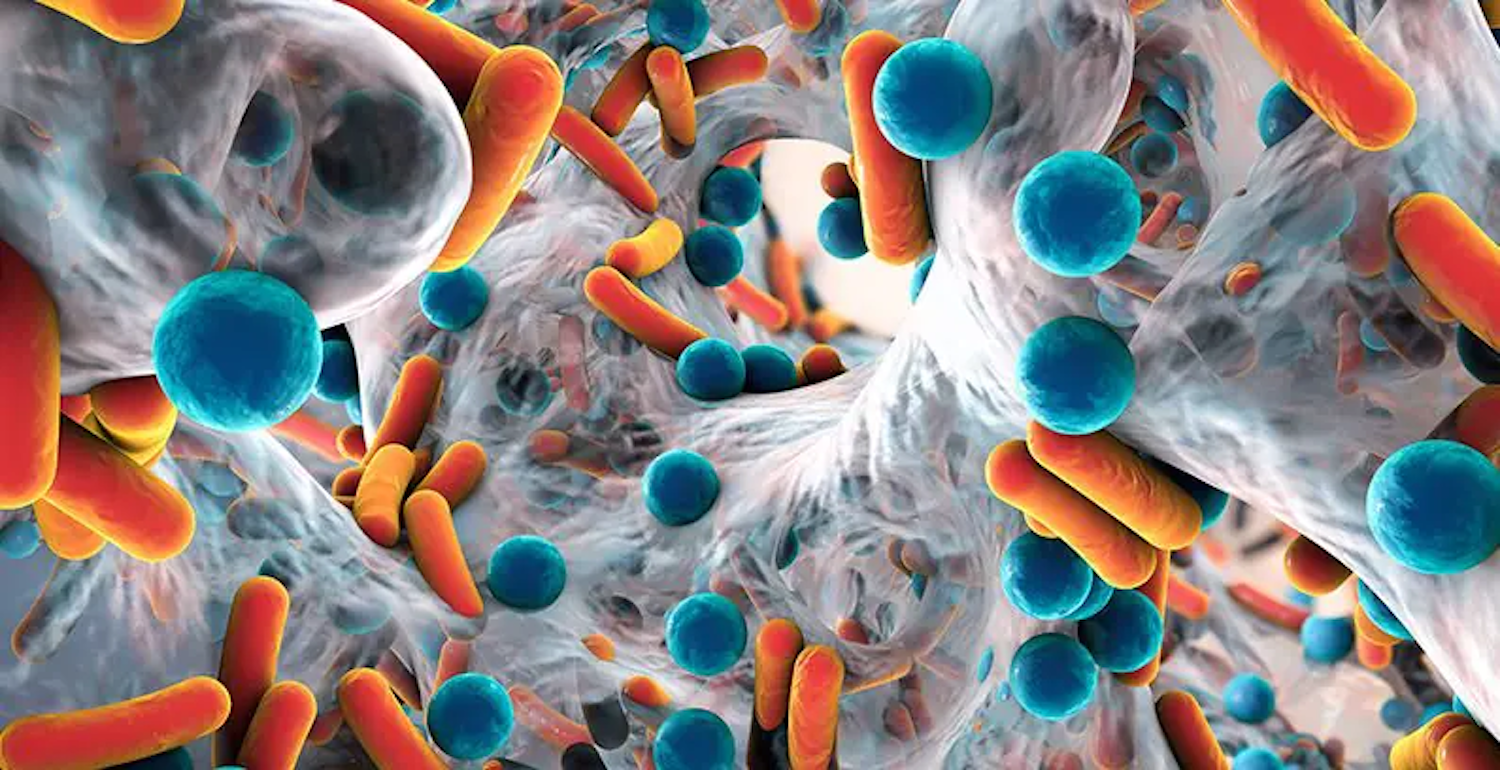 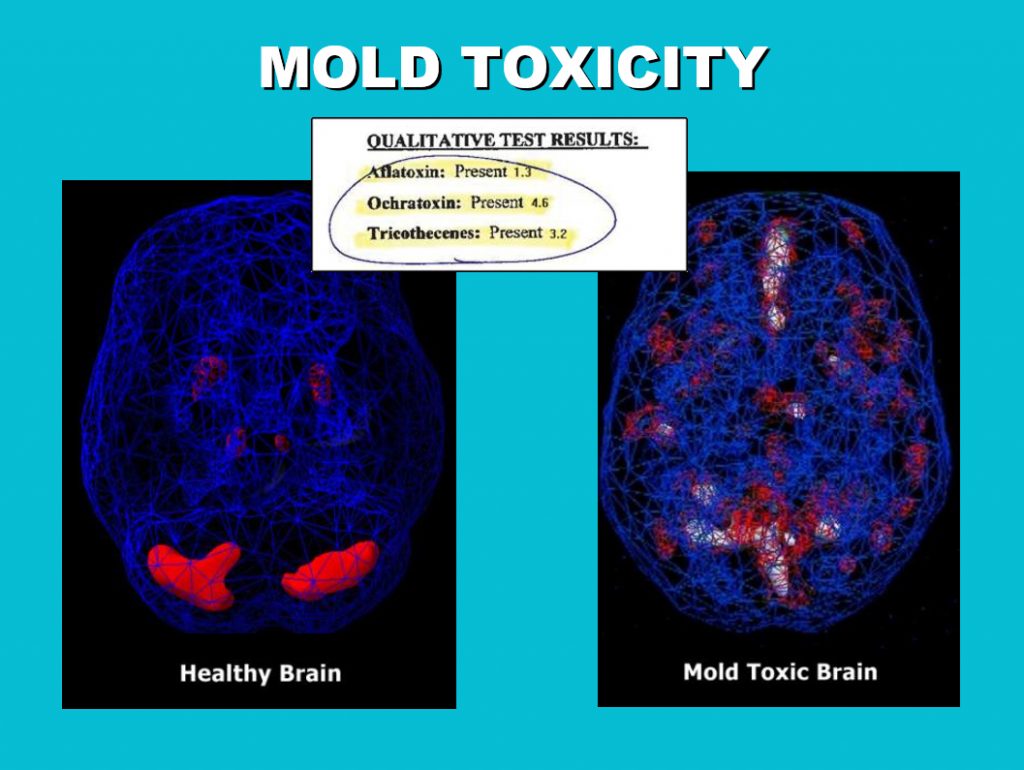 The red and white brain regions seen on her mold toxic brain, as compared to blue regions on the healthy brain, demonstrate excessive blood flow which correlates with excessive electrical activity.

The tests above were from a female college student, Susan, who was happy and healthy before college. Her personality changed after living six months in a moldy dormitory. She developed a panic disorder which progressed to rage, and was subsequently misdiagnosed with Bipolar Disorder.

Our testing revealed Trichothecene levels that were twenty-fold the CLIA critical level. This excessive electrical brain activity was the true cause of her anxiety and Bipolar symptoms. After two weeks of our intravenous protocol for treatment for mold exposure, she no longer suffered symptoms of depression, fatigue, anxiety, panic, and rage.

Unknowing doctors prescribe addicting medications like Xanax and Klonopin for anxiety disorders that are often caused by mold toxicity. Mold toxic patients often use alcohol and sedating drugs like Xanax or OxyContin to calm their anxious brains because their physicians fail to diagnose mold toxicity as the underlying cause of their anxiety disorder.

When discussing the spectrum of anxiety disorders, from insomnia to panic disorder, we need to understand that the progression depends on the level of excessive electricity in the brain.

During the initial onset of mold toxicity, patients may only notice insomnia when trying to sleep. As their brain accumulates more mold toxins, the brain’s electrical current continues to rise, causing daytime anxiety and nighttime insomnia.

With continued exposure to hidden mold, patients with mold genetics accumulate more brain toxins over time. They eventually progress from a generalized anxiety disorder to a diagnosis of panic disorder.

We have successfully treated over 2,000 mold-toxic patients who had been previously misdiagnosed with Bipolar disorder. Unfortunately, America’s psychiatrists are quick to throw out an arbitrary name, a diagnosis of Bipolar, without first looking for a medical cause.

Mold toxic patients are routinely prescribed anti-psychotic medication by psychiatrists who fail to look for an organic cause of the patient’s bipolar symptoms. Psychiatrists remain amazingly ignorant regarding neurotoxicity in general, especially mold toxicity.

Using our intravenous treatment for mold exposure, we can normally remove enough mold toxins in three weeks to return the mental function of these “bipolar-ish” patients to normal and get them off all of their bipolar medications.

Our Fibromyalgia research at Sponaugle Wellness Institute has proven that mold toxicity is the primary cause of Fibromyalgia in middle-aged women. Many of our Fibromyalgia patients are women who were misdiagnosed at ten or more University Medical Centers.

Without a proper diagnosis, physicians simply prescribe medications that decrease the excess electrical current using drugs like Lyrica that simply treat the symptoms of Fibromyalgia, not the underlying cause of it.

The primary mechanism by which mold toxicity causes depression and chronic fatigue is the shutdown of the brain’s A – 5 Nucleus.

Dopamine runs the brain’s reward and pleasure center – the nucleus accumbens – in our midbrain. Dopamine is manufactured in both our brains and our adrenal glands.

Problematic is that Dopamine naturally converts to norepinephrine through an enzyme called Dopamine hydroxylase.

When mold toxins shut down norepinephrine production in the brain’s A-5 nucleus, more dopamine is converted to norepinephrine – it is essentially “stolen” to make more norepinephrine. This leaves patients with a relative dopamine deficiency and subsequently an underactive nucleus accumbens, thus, causing depression and brain fog.

Norepinephrine naturally converts to epinephrine, which is pure adrenaline. When mold toxicity shuts down NE production, there is less norepinephrine to convert to adrenaline. Thus, patients feel like they have a 20-pound cement block attached to each leg.

Norepinephrine and epinephrine deficiencies also cause dizziness upon standing too quickly. 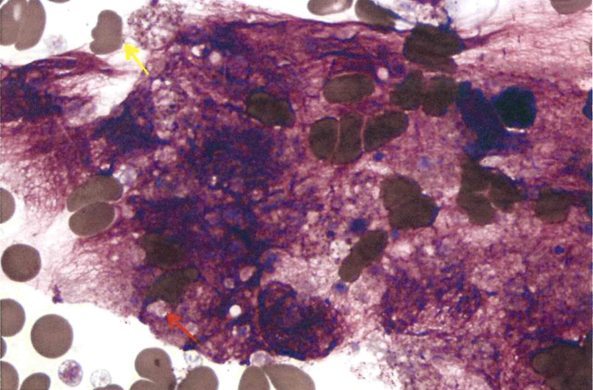