Lindsay's Story of Healing From Mold

“It all started with what seemed like a flu virus last November 2016, only it didn’t go away. In fact, Lindsay got worse really quickly. Dizziness, fainting, numbness in her limbs, extreme anxiety, nausea, and fatigue so badly she could barely get out of bed. Muscle and joint stiffness, depression, and extreme neck pain, accompanied by many other symptoms. She had been off work since January and had seen 6 different specialists, had every test in the book, and no one was able to tell us what was wrong,” wrote Lindsay’s Mother, Liz.

“I was diagnosed with Vertigo, and given medication, but that didn’t help. Then diagnosed for Anxiety, Depression, Insomnia, and put on more medication. Every doctor just kept saying it’s in your head, reduce the stress in your life, speak to a psychologist, but I received no answer for what was actually happening to me. Every week there would be something new; hands tingling, I could barely walk, my teeth began breaking, I developed TMJ, I had white spots appearing in my vision, and my vision was not only blurry, but I would lose sight for half-an-hour periods at a time, etc.”, said Lindsay.

When Lindsay began her treatment for Mold Toxicity at the Sponaugle Wellness Institute, Dr. Sponaugle found that Lindsay was not only infected with Lyme disease but also infected by both Babesia and Bartonella. This is not uncommon as most ticks infect you with more than one bacteria. The bacteria caused a biofilm to form on cells under which they hide, which makes tests appear negative, and treatment more difficult.

“Lindsay began treatment to dissolve the biofilm and expose the bugs. When the Lyme, Babesia, and Bartonella enter the bloodstream, they can make your symptoms worse than they ever have been! However, the good news is that they can also be targeted by your immune system (which we have been strengthening since the beginning). Lyme weakens your immune system, so this is a huge part of our holistic treatment here. It is a real balancing act not to release more bacteria into the bloodstream than your body can handle, so we go day by day,” said Liz.

Verrucarin A belongs to the class of Trichothecene, a group of sesquiterpene toxins produced by several fungi. These numbers can be demonstrated on Lindsay’s Mycotoxin test shown here, where you can see her results at 451, and next to it, the government’s toxic range shows between 0.5 – 1.2.

Lindsay worked on a cruise ship for seven years, and Dr. Sponaugle does not doubt in his mind that the ship is what caused her to have the highest Trichothecene level he’s ever seen.

Lindsay completed her treatment at Sponaugle Wellness Institute in November 2017 and is back in Ontario with her family. She has decided to share her journey with a news station, which can be viewed here: http://www.chch.com/lyme-disease-season/ 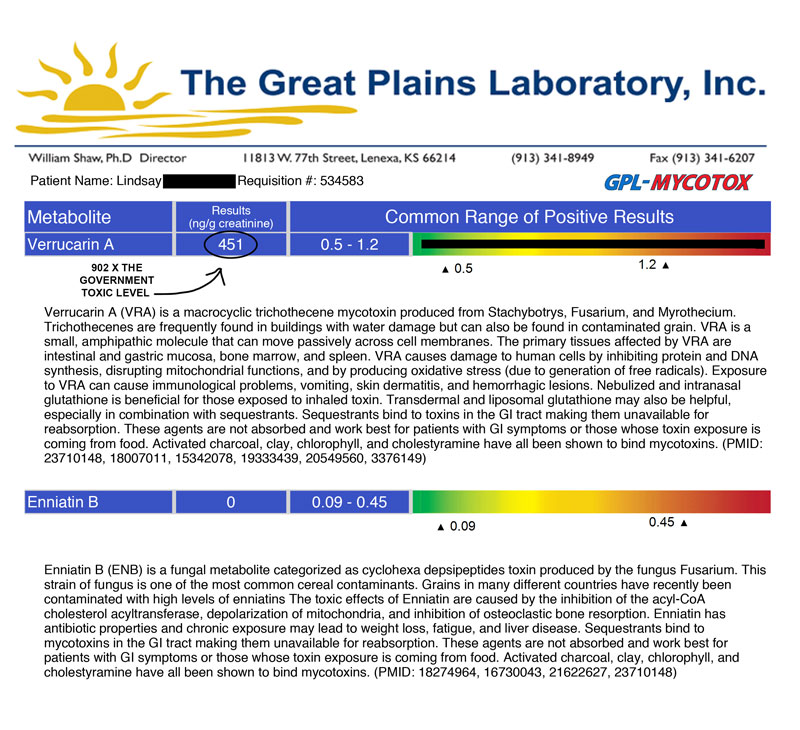